So, my housemate, Abuelito Jesse, is somewhere between 70 and 100 years old. I have run into three ways we are having trouble communicating. Most obviously, my Spanish is fatal. Second, he is trying to improve his English as much as I am trying to improve my Spanish. So he keeps sliding words in English into his speech - but I don't recognize them as English words! This morning he said: "Necesito dar un ride a este muchacha." And me: "otra vez? un ride?" Because "ride" didn't really sound like ride...and I totally thought it was a word in Spanish that I didn't understand. Third, and perhaps most hilarious: he asks me questions multiple times over the course of a day. I am thinking my Spanish is so crappy that he just doesn't understand me. But I am beginning to think he just doesn't remember. Any advice on how to tease all this out? Mas riendo, creo. 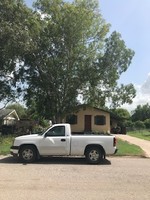 Weeks packed into one day

Wowie - I don't know where to start. Maybe with where I am now: sitting in a park in Los Fresnos (population about 5K); there is outdoor wifi, a skateboard park, horseshoe pits, and a playground. (There are a shit-ton of bugs, too. Let's not forget it is hot, humid, and rained inches a few days ago.) It's really nice - even with the bugs. I hear English, which is pretty uncommon. My experience so far is that everyone here is either bilingual or speaks Spanish only. It won't be true of everyone, of course, but I hear very little English.

I visited the border today. I became the driver for El Pastor for the day, and traveled with him on his errands and then he took me to Brownsville. We visited the bus station where INS drops people off who have been paroled from detention. People who have a physical address to go to (family, friends, church) are often paroled. If you have no physical address, you stay in detention or are deported.

We visited the wall. Matamoros, the city right across the border is visible from the US side. The Rio Grande was high with lots of debris floating by, probably from the storms earlier in the week. The bus station is a couple hundred yards from the border. There is a bridge across the river that people and vehicles cross - lots of traffic every day. And it is across this bridge that some people come every day who are seeking a new life. Our law requires us to accept people who come to our country who are seeking asylum. When Trump shut down other pathways into this country, this one stayed open. So, virtually everyone asks for asylum. When people ask for asylum, they are immediately put into detention. There are detention centers in Brownsville; there is an unaccompanied minor detention center outside of Los Fresnos. Families are housed in a detention center in McAllen. You cannot access the detention centers unless access is granted. El Pastor is called occasionally to go pick people up, but he said it was unlikely they would let anyone in to observe. 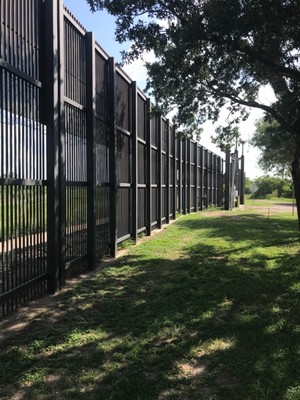 El Pastor said that most people coming across the border come across a 60-mile stretch of the nearly 2K mile border. The 60 miles is where I am. He said there are hundreds of people camped out on the Mexican side of the border just waiting for a chance to cross the bridge. That the cartels manage who gets to the front of the line.

El Pastor is 81 and escaped Cuba as a young man. He spent time in a prison camp and barely escaped with his life. He laughs alot, calls everyone "mi amor," prays fervently, and decided when he escaped Cuba to devote his life to helping people find safety. Someone else who works with him told me today he is known as the "Mother Teresa of Disciples" in the Disciples of Christ congregation.

I will share more about exactly what Southwest Good Samaritan Ministries does - and I am learning. The change in our government has changed much for them. SWGSM used to house refugees who were in the asylum-seeking process, but now those people are detained. If they get a parole card, they don't stay close by because a) there are not good jobs here (though they can't work legally); and b) the judge for this region is hard-nosed. If people have anywhere else to go, they do that. That said, El Pastor houses people who are likely to be killed or tortured if they are deported and who have nowhere else to go. I have met a few, including one 31-year old woman from Honduras who is pregnant and has a toddler who will be 2 in August. She has 3 children in Honduras. I don't know her story yet. All I know is she has no one in this country.

I hate and love Wal-mart. Again. Because they suck so badly, and have everything you need. Today, I bought size 5 diapers, baby wipes, 2 pairs of size 5 plastic sandals. And I bet I will be back for many more trips. It is a fucking odd world that we are in with these stores crammed to the rims with crap, and people in such dire need.

I can walk to four places that give pay-day loans. The nearest Starbucks is 9 miles away.

I went to the coast today, too. Cotton! These people grow cotton down here - who knew? And oranges. There are palm trees and cacti (I didn't know those two things co-existed). There are massive wind farms here! These elegant, giant-sized ballerinas slowly spin. I find them enchanting.

El Pastor provided me a pick-up truck to get around. So, I am cruising around South Texas in a pick up truck, listening to Mexican music. The sky is huge, the enchiladas are ricisima.

Tomorrow, I go to McAllen.

Hi All - I am going to give this platform a shot for sharing my experiences from this summer. I haven't tested it out much, so if it is a pain...I am sorry.

Soph and I had an amazing week in Portland, OR (June 18-June 25). Honestly, there is not much in that town not to love. I was texting photos throughout of very funny storefronts and signs. Things like "MF Tasty" for the name of a food truck. And "Cuts, Shaves, Whiskey" for - I kid you not - a bar and barber. Get a shave, get a whiskey. Another highlight was a dude spinning vinyl in a gift shop. Two turntables, salsa funk. While you are buying birthday cards. The Portlandia-ness of it was out of hand. The trees were a) many, b) very tall, c) magnificent. I dug it out there alot.

Total Ya-Ya fest with my college girls - and all of our children. We did a full-on Ya-Ya ceremony around a fire pit with drumming and regalia. Not kidding. I'll figure out photos on this platform and (maybe) share some. Donna and her family hosted us; 5 million points for Donna's husband, Craig, who shuttled, poured, grilled, laughed for and with us. (He has 19 years of experience with this clan under his belt....but still!)

Yesterday, I flew Portland to Harlingen, TX. But let's be clear, it was actually: Portland-Las Vegas-Houston-Harlingen. I woke at 3:30AM and got to my bed in Los Fresnos, TX about 8:30PM. It was a long day. I was welcomed literally with open arms by Father Pereira at the airport, and then he took me for enchiladas. So, it's basically a perfect fit for me here. Father Pereira (whom I will call El Pastor from now on) helped me settle in a little house across the street from his church and the small housing complex he has built over the years for refugees. I have my own room, and share the house with an abuelito named Jesse. Jesse has lived in Los Fresnos since 1964, and traveled the country picking fruits and vegetables until his knee gave out in 2001. At least that is what I am understanding between my hilarious Spanish and his halting English. But I know my Spanish veggies pretty well, so I think I am on target.

No wifi in the house, but there is AC. I also have a ceiling fan in my room. I share a bathroom and kitchen with Jesse. Mi casa para (por?? dios mio) tres semanas.

El Pastor will pick me up in a little bit and introduce me to what I will be doing. I still don't have much of an idea what that is. Last night he mentioned re-building his website after I told him I worked at an ed-tech company. Eeeeek - all these tech skills I don't have! Or Spanish! I hope they trust me with a washing machine.

Hugs and love to all.