Buenas - I wasn't able to get to Internet Friday or Saturday, and yet I have so much to share. I am going to do a major dump, and if it is too long...just skim ahead. (My book club knows I think every book since the invention of word processing is 1/3 too long. And now these entries are going to fall into the same trap!)

On Friday, I went to McAllen with El Pastor and three people who are living in the small apartments he has built adjacent to his church to house people who are seeking asylum. The abuelita (grandmother) is Elsa; I am guessing she is about 40. A daughter, Astrid. And a granddaughter, Tatiana (that's not quite right...but I didn't understand this chicita when she told me her name. She is about 3 or 4). They are from Guatemala. A short version of their story is that Astrid was abducted while walking to class. She was taken out of the city by bandits who planned to sell her into a sex trafficking ring. She escaped; got back to her house. Before she and her mother were able to flee, they were both captured and held against their will. Lots of abuse by many men. Astrid became pregnant from the abuse. They escaped. They made their way across Mexico and crossed the border into this country at Brownsville. Astrid gave birth to a healthy baby girl, Tatiana. They have been here for 3 years, and are struggling to get papers (for working, for asylum, maybe other things...I am still learning so much). One of the hurdles is getting a birth certificate for Tatiana.

El Pastor and I took them to the Guatemalan consulate in McAllen. A whole bunch of talk, the crux of which is they have to go to Houston for some other kind of paper or certificate.

At the bus stop, we came to briefly know the stories of two families. One from Venezuela - mom, dad, two boys. Parents in mid-20s at the most. They had been in the detention center for 4 days. They were on their way to Orlando, FL where the father's mother lives. They looked good, and were clearly healthy, though they had not changed clothes or showered once in 5 days. The mama said the detention center was packed and the food was awful. Her younger son was sick (vomitting) while they were there, and there was no assistance for him. They asked us for Pedialyte. This whole family had slip-on shoes; this suggested they had pretty good knowledge about the detention centers and resources to come with those shoes. The detention centers take away shoe laces and belts upon entry, and do not give them back. After speaking with this family for about 10 minutes, El Pastor looked at the rest of us (me, Elsa, Astrid, Tatiana) and told us he would be back. And they were off. And there we were at the bus station!

So I started talking with a small family of a mother and son, Marni y David. David is 13 years old, and too skinny for a growing boy. Marni and David had no shoe laces; I watched them get laces from someone and put them in their shoes. There are so many parts of this that are humiliating, and I have to say that watching these two people bend over to put brown laces in their white sneakers so carefully is an image I won't ever forget. I can't put my finger on why it was so symbolic. This mother and son had nothing. The clothes on their backs and 4 Mexican pesos. Immigration had a suitcase of hers, and had not released it to her when she and David were taken to the bus station. She had a small piece of paper with a long number printed on it. This was the only thing she had to try to claim the only thing she brought with them. These two people were lovely. David has a quick, shy smile and big eyes. This is what love does, because their trek was harrowing.

They were waiting to catch a bus to New York, where they would then go to Fairfield, CT. Marni has a sister-in-law in Fairfield. The bus rides would be at last 48 hours, and they literally had nothing. I bought them Subway sandwiches from a restaurant in the bus station, and as she told me her story (which of course, I barely was understanding), I came to understand they literally had nothing. I gave them $20. I gave them my phone number. Here they are: 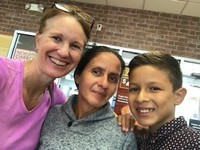 Should I have given them $100? $1000? Should I have gotten Marni's sister-in-law's phone number in CT? (um - a resounding yes to this last question. I can't get these two out of my mind. I wonder if they are arriving today.)

Marni led us in a long prayer before eating sandwiches. She asked me for a "vasito" and I heard "bolsita." I went to the counter and got a plastic bag. Then I watched her pour some of David's Coke into the bag. Aaack!! I realized my mistake and went running for a cup. I was able to explain to her and David my misunderstanding and told them I was embarrassed. They laughed with me.

David wants to be an engineer. Marni wants to open a pastry shop. These two fled El Salvador 1 year ago and made their way across Mexico very slowly. They were in detention for two days.

May our hearts and our minds and our souls be with Marni and David and really take in what it could be like to give all that you have to protect your son in this way. When I told her she was brave, she shook it off. Reading this brings tears to my eyes - and also my heart swells with hope for them.

oh sarah. what a beautiful "dump".
teary from Arlington and sending you and all those at the border all manner of blessings today.

Oh Sarah, as well. I too am teary - what an amazing thing you are doing. I saw in another post that you mentioned ways to help and I'll read that next.