My last day in the Rio Grande Valley was Sunday. My sister-friend, Lynn, came down on Saturday and worked two days with me before we drove back to Houston together early Monday morning. On Saturday, we worked all day in the Good Neighbor Settlement House (GNSH) respite center in Brownsville, and we served dinner in the bus station that evening. On Sunday, we went to church (Feliberto's services are not short.

) Then, delivered supplies to Iglesia Bautista in Brownsville and helped serve dinner across the bridge in Matamoros in th evening. (I will write about that in a later post.) In the midst of this were a series of good-byes for me that were very hard. I keep struggling to properly describe this experience, and I think I am going to go with "holy." New word for me, and feel vulnerable using it. But there truly were transcendent moments almost every day - with people, by myself, outside, inside, in English, in Spanish. There was a connection to the people and the action that was just happening on a different plane for me.

In the GNSH respite center, I was on the floor doing puzzles and playing Jenga with lovely kiddos. One young father was with us with his little boy, who delighted in throwing piles of puzzle pieces in the air. "Soy Sarah," I said to him. "Soy Walter; mucho gusto." "Walter es el nombre de mi padre!" I said in surprise (Walter is my father's name). Right next to this Dad-Walter, a 12-ish year old boy said "Soy Walter tambien." Again, I am totally surprised - two Walters? And then they tell me Walter is a very common name in Guatemala. Who knew? I also met two Darwin's and 1 Edwin from Guatemala. Women named Myra, Jennifer, Dixie... 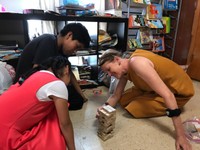 12-ish-year-old Walter is one of five, and his mother and siblings are on the road to join their father in Colorado. Two boys, and three girls. Their mom is a smiling, petite woman who braids her daughters' hair into works of art. 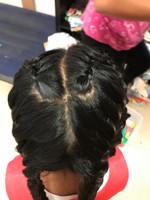 The day Lynn and I were there, a Congressional delegation (and their very large staffs) were visiting. This mom asked me who those people were. In my passable, but not-nuanced Spanish, I told her they were people from the government who were visiting because they were interested in the experience of the immigrants. Fear gripped her face - of course. I started spitting out that they were totally safe, that there was no danger. I flagged over a native Spanish speaker who explained again that she and her children were safe. Her face released. Lynn hugged her, and this beautiful woman did not let go for several minutes. A massive sensitivity boost for me - and left me feeling very foolish for having stumbled into that. (Remember my prayer for one good humiliation a day? Presto.)

A little later, I introduced myself to one of the Congressional staffers. "Are you from here?" I asked. "No, Washington, DC." (As if it were a special place that required knowledge beyond anything that might be available in the Valley.) I told him a little about the respite center and introduced him to the five-kiddo family. He asked me to ask a couple of questions as he had no Spanish. Where were they from? Where were they going? Then he said "Ask her how old she is," referring to the mother. I turned my head to translate - and a prayer of thanks for all that is holy - I caught myself. What the actual fuck? Would he want to check her teeth next? Thank goodness my brain turned on, and I said to him "You don't ever ask a woman how old she is!" And he said to me, "I was going to ask you next." ?!?! Asking a white woman her age makes his faux-pas pass? Um, no. I said, "Whatever my age, I look damn good."

White, brainy, upper-middle Congressional staffer thinks it is ok to ask a poor Guatemalan woman who is petite and attractive - and the mother of five - how old she is? No. But it took me a second to catch myself. She is a caring and scared mama, walking her children to safety. Not an exhibit for the curious.

Thank you, thank you to every force that allowed this experience to happen for me. Some of you tell me I was brave. I wasn't. Some of you tell me what I did was great. It was good. And, I was shoulder-to-shoulder, side-by-side with so many wonderful people taking care of each other with love, dignity, humor, and sensitivity. The only relevant question was: what do you need?

Sister, you are a piece of walking light. Thank you for sharing this amazing journey. And thank you for keeping your dignity, your brains, your basic human goodness, and your sass with this Congressional staffer. You GO!