Guys, dinner was a success. Abuelito Jesse and I figured out a way to actually keep the hot dogs hot (ironic because laying them on the sidewalk would pretty much do that...) - and it worked!

A smaller crowd than Friday night. Which was a good thing, because I was flying solo. I served about 35 people. Same drill: people get dropped off at the bus station by Border Patrol from detention. The families either wait in the bus station for their bus, or, if they have a long wait, or have to stay the night, the city takes them in a van to a respite center. Most families were from Honduras. I met two families from Mexico - and one from Georgia (Eastern Europe!). I spoke Spanish to him, and he said: "No English." So, English and Spanish were both out, but happily, he took hot dogs for his family anyway.

Abuelito Jesse also clued me into the fact that no one south of the border puts ketchup or mustard on their hot dogs. "Ack, no!" he shakes his finger at me. Tomates, cebollas. "Pico de gallo?" I ask? "Oh, si." So, I made pico (my first time - yep, super-easy y muy buena) and served it on top of the hot dogs. It was a hit. I thought I was being uber-culturally aware and brought flour tortillas and limes (folks here seem to squeeze lime juice on almost anything). And not a single tortilla or lime was taken. I love it! In an earlier post, I shared that I will pray for one good humiliation a day - that one isn't too bad...but a bit humbling, nonetheless.

Two kiddos from Honduras attached themselves to me from the moment I go there and helped me pack up to leave, almost three hours later. I couldn't understand the sister very well (15 years old, named Saria), but could understand her brother (12, Danny). He was a sweetie - and started reading the English words on the packages I had on the table: "crayons, chewy, jumbo." He was awesome. They both were a big help and fun to hang out with, though I was super-frustrated not to understand Saria hardly at all. Also, as I get tired, I can barely speak in English, forget Spanish. 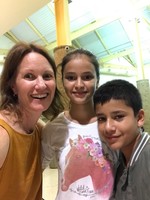 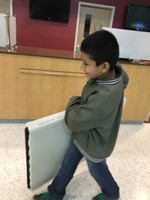 Another volunteer who lives in Brownsville stopped by to check on me. She was alarmed that I was alone. While she was there, two dudes who are homeless and live in Brownsville came asking for food. As I had been told, I explained to them the food was for immigrants. They pleaded. I gave them 2 apples. Weird, right? They probably need the food, but if we started feeding homeless people, the line would grow fast. And Elisa, the volunteer, leaned in hard with me saying one of the guys was a really bad guy. She said several times that I needed to make sure he didn't see me leave alone. Awesome. It all worked out - but that was a not-so-fun-wrinkle.

One thing to pass along (which I assume most of you know, but given that this just happened, I will share): please don't pass along clothing that you wouldn't wear yourself. Not a single human wants to look like a dirtbag. Someone dropped off a small bag of clothes to hand out. They were crappy t-shirts, a couple of which even had ridiculous stains. I just threw this crap in the trash. Seriously? If you look at something and decide it is not in good shape enough for you or your children to wear, it is not good enough for your Guatemalan or Honduran sibling either.

I think I have to say again (and again and again) that the bravery of these mothers is breathtaking. Their love for their children is palpable.

Much love to you,
sg

Dignity. Should be the underlying piece of EVERY SINGLE THING WE DO. Every human being deserves to live with dignity. Every place I've ever been, every home in personal and work travels has been exceptionally clean. Swept dirt floors. Very worn, but hand-washed clothes. No one wants to wear dirty stuff. I love you. Thank you for this.